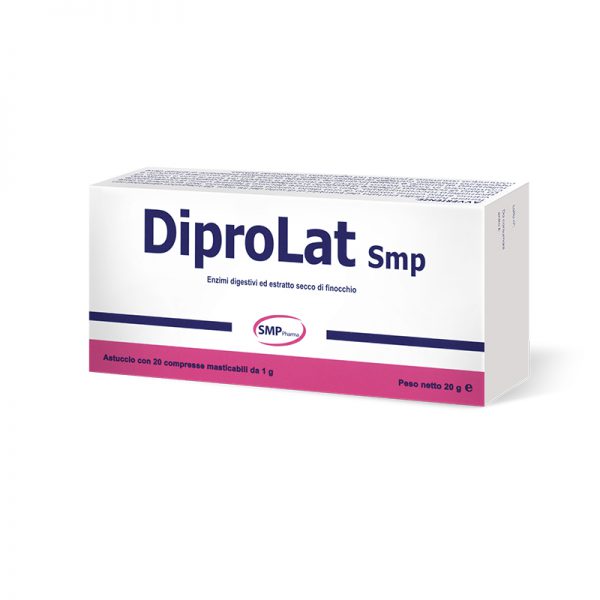 DiproLat Smp a dietary supplement of alpha- and beta-galactosidase, fennel and dimethicone.

Alpha-galactosidase act on foods of plant origin that can cause the formation intestinal gas:

Beta-galactosidase act on lactose-containing foods that can cause the formation of intestinal gas:

Alpha and Beta galactosidase: they are a group of enzymes responsible for the hydrolysis of galactosides in monosaccharides. Galactosides are defined as all the molecules charactarized by a glucidic portion containing galactose or an organic, non-glucidic molecular part, called aglycone or genin. Depending on whether the glycosidic link is “above” or “below” the galactose molecule level, galactosides are classified into alpha- or beta-galactosides. The most important β-galactosidase is lactase, which is secreted by the mucosa of the small intestine, it presides over the digestion of lactose ingested with food, medications and supplements, in the two monomers that make it:  glucose and galactose in order to allow the digestion, thus avoiding the onset of swelling, poor digestion, flatulence and burning. The alpha-galactosidase enzyme is absent in humans but it is essential for the digestion of some carbohydrates (verbascose, raffinose and stachyose). These oligosaccharides, mainly contained in legumes, cause flatulence because they are indigestible and non-absorbable, but fermentable by the intestinal microbial flora. An adequate exogenous intake of alpha-galactosidase makes it possible to break down the aforementioned oligosaccharides into fructose, glucose and galactose before reaching the colon, thus preventing them from becoming an anaerobic fermentation substrate, preventing the formation of gas.