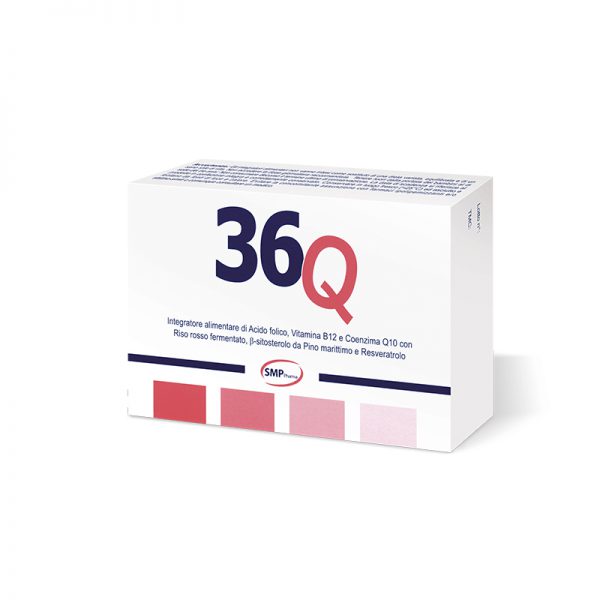 Food supplement of Folic Acid, B12 Vitamin and Coenzyme Q10 with fermented red Rice, beta-sitosterol from maritime Pine and Polygonum cuspidatum indicated to provide an additional supply of these nutrients in case of deficiency or increased need.
Folic Acid and B12 Vitamin contribute to the normal metabolism of homocysteine, the maritime Pine and the Polygonum cuspidatum play an antioxidant effect while the Monacolin K of red rice contributes to the maintenance of normal levels of cholesterol in the blood; this beneficial effect is obtained with the daily intake of 10 mg of Monacolin K.

Fermented red Rice: it is obtained from the fermentation of the common cooking rice (Oryza sativa) by a yeast (Monascus purpureus or red yeast). During fermentation this yeast is enriched with a group of substances called monacolins including Monacolin K which reflects the chemical structure and the pharmacological action of lovastatin (a drug belonging to the statin category). Similarly, Monacolin K is able to inhibit HMG-CoA reductase which is a key enzyme in cholesterol biosynthesis. In view of this, these natural products have been scientifically attributed a marked cholesterol-lowering activity.

Beta-sitosterol from maritime Pine: belonging to the phytosterol family, they are substances of plant origin chemically similar to cholesterol. In particular, beta-sitosterol is the most representative of this class of compounds. in the intestine, phytosterols compete with the cholesterol present in food, binding to bile salts and being absorbed by the intestine thus promoting the elimination of cholesterol with the faeces, thus reducing their assimilation; unlike the cholesterol, these do not feed the deposition of fat in the blood vessels.

Coenzyme Q: it is a ubiquitous molecule present in all cells and that intervenes directly in the production of energy. The concomitant administration of this molecule during the treatment of hypercholesterolemia is particularly important since the levels of this coenzyme can go down giving rise to different types of symptoms.

Resveratrol: in addition to the well-known antioxidant action, recent studies have shown that resveratrol would help to counteract LDL cholesterol in obese or overweight people. In particular, it seems that its action is aimed at reducing the production of apolipoprotein B, the transport protein of the so-called “bad cholesterol”.

Folic acid and Vitamin B12: the main function of these nutrients is to promote the metabolism of homocysteine, an important marker in assessing the risk of many cardiovascular diseases which is linked to high blood cholesterol levels.