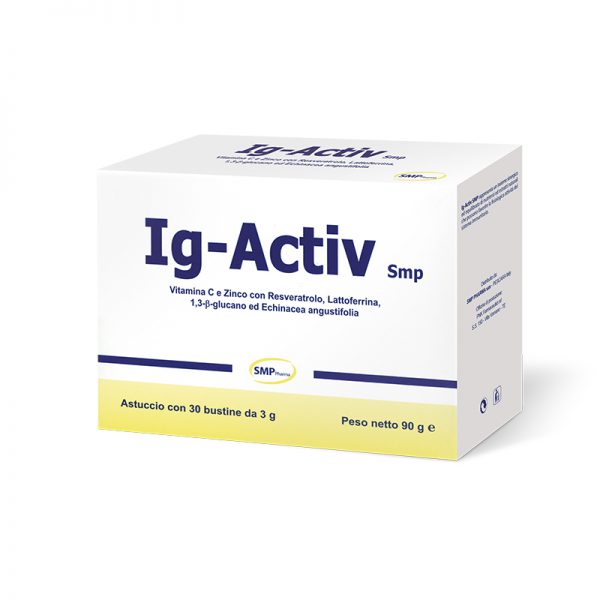 Dietary supplement of Vitamin C, Zinc with Resveratrol, Lactoferrin, 1,3-β-glucan and Echinacea angustifolia indicated to provide an additional supply of these nutrients in case of deficiency or increased need.

Echinacea angustifolia can favour the natural defences of the organism and the functionality of the first respiratory tract; Zinc and Vitamin C can contribute to the normal function of the immune system and to the protection of cells from oxidative stress; the Polygonum cuspidatum (Resveratrol) can have an antioxidant action and favour the fluidity of bronchial secretions.

1,3-β-glucan from oats: its polysaccharide structure exerts a specific immunostimulant action because it binds to macrophages, at the same time it stimulates, activates and increases the production of T and B Lymphocytes. It also stimulates the production of cytokines, interleukins and other chemical mediators responsible for promoting the immune response leading to an increase in tissue repair and has a protective action on the body by exerting an antibacterial, antiviral and anti-tumoural action.

Lactoferrin: it is a glycoprotein that binds two Fe2+ atoms, it is present in breast milk and in many secretions. It has: an immunostimulatory action promoting the growth and differentiation of T helper lymphocytes, CD4, CD8 and B lymphocytes and also has an important role in the liberation and regulation of chemo tactical chemical mediators; antibacterial action by not making free iron available, essential to promote the growth of pathogenic bacteria thus making them more vulnerable to the action of antibiotics (eg: easier eradication) of  Helicobacter pylori obtainable with lactoferrin intake during antibiotic therapy; antiviral action: preventing the fusion and penetration of the virus into the host cell; antioxidant action: chelating free iron counteracts the formation of free radicals and also an antianemic action: the ability of this glycoprotein to chelate iron appears to be beneficial as it increases the bioavailability of the iron itself.

Resveratrol: this important molecule, besides carrying out the well-known and important antioxidant activity, is also able to determine an action of stimulation of the immune function, it seems to inhibit some mediators of the inﬂammatory processes and also seems able to inhibit the replication of some virus. It is therefore an important element in the activation of the immune system in general.

Zinc: is a fundamental micronutrient for the normal development of the human organism. Many enzymes have among their constituents the Zinc that regulates their activity: it is endowed with the ability to hold together the molecular subunits stabilizing the proteic structure. Within the immune system, some of its functions are regulated by the presence of this microelement, whose deficiency leads to a weakening of the immune defences and an increase in infectious diseases. Important the its action concomitantly with the presence of vitamin C and Echinacea.

Vitamin C: as it is well known this vitamin possesses various roles among which it increases the resistance of the organism, strengthens and stimulates the function of the immune system, destroys free radicals and prevents cellular degeneration (including the aging process) as well as participating in the processes of cellular respiration. Vitamin C plays an important role in the healing of wounds and burns because it facilitates the formation of connective tissue of scars, promotes iron absorption, prevents the accumulation of histamine (responsible for allergies) and modulates the production and activity of prostaglandins (mediators of the inflammatory processes).