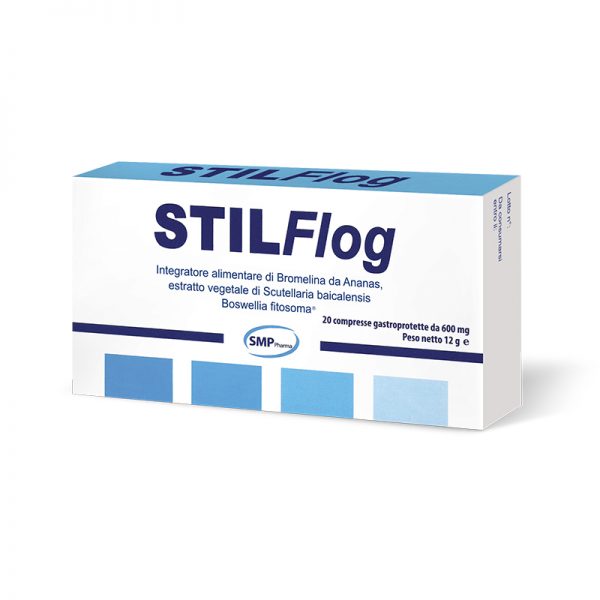 Dietary supplement of Bromelain from Pineapple with Boswellia fitosoma® and Scutellaria indicated to provide an additional supply of these nutrients in case of deficiency or increased need.
PHYSIOLOGICAL EFFECT: Boswellia and Scutellaria promote joint function; Boswellia counteracts localized states of tension; Pineapple promotes the drainage of body fluids and the functionality of the microcirculation.

Bromelain 2500 GDU: this proteolytic enzyme performs important functions at the level of the connective tissue proper and above all against fibrin. In fact, Bromelain possesses important fibrinolytic, anti-aggregating, anti-inflammatory and draining properties, thus favouring the reduction of the sense of swelling and pain in the lower limbs typical of conditions of poor peripheral circulatory capacity.

Boswellia fitosoma®: Boswellia serrata is described as a cure with powerful anti-inflammatory activity. The boswellic acids hinder the functioning of an enzyme capable of stimulating the production of substances that facilitate inflammatory processes (it seems to inhibit the arachidonic acid cascade). Furthermore, they are able to inhibit elastases, highly destructive enzymes that attack and destroy the elastic tissue of tissues in which an inflammatory process is taking place. It is hypothesized that boswellic acids intervene at the site of inflammation by inhibiting tissue proliferation and destruction of connective tissue. This specific mechanism makes Boswellia an effective alternative to synthetic molecules in inflammatory treatments, especially if prolonged or in chronic states. This form of conveyance of the extract also makes it even more bioavailable and therefore effective.

Scutellaria baicalensis: is a plant rich in bioflavonoids, traditionally used in Chinese medicine as an adjunct in food allergies and food intolerances and for hay fever. In particular, the studies showed anti-inflammatory activity similar to NSAIDs (non-steroidal anti-inflammatory drugs) but without any side effects on the stomach and a good antihistamine activity.