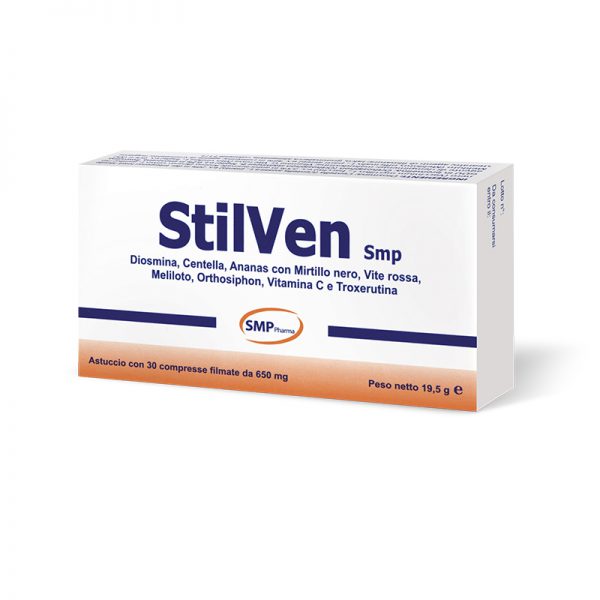 STILVEN SMP is a dietary supplement of Vitamin C, Diosmin and Troxerutin with Centella, Pineapple, Blueberry black, Red Vine, Melilotus and Orthosiphon indicated to provide an additional supply of these nutrients in case of deficiency or increased need.

Components and their characteristics

Diosmin: it is a ﬂavonoid, a natural substance with ubiquitous distribution in the plant world but contained in significant concentrations in the fruits of the genus Citrus (lemons, oranges, grapefruits, etc.). It has always been known and proposed in the treatment of venous insufficiency characterized by night cramps, pain, heaviness and swelling of the legs but this substance also has anti-edematous, anti-inflammatory and anti-varicose activity, which make it useful in the presence of hemorrhoids, cellulite, varicose veins, capillary fragility and related manifestations such as bruising, hematomas and purpura.

Centella asiatica e.s. 20%: the triterpene derivatives present in Centella leaves are particularly useful for the treatment of chronic venous insufﬁciency. Stimulating the production of collagen by ﬁbroblasts causing an increase in fibronectin which is a structure protein, important for holding the wall of the venous vessels and the collagen itself.

Vaccinium myrtillus e.s. 2.5%: it has long been known that the dry titrated blueberry extract is able to fight fragility and excessive vascular permeability through a well-proven capillary protective action in both venous and arterial blood vessels. This action is explained by the fact that the anthocyanins present in the phytocomplex are able to inhibit the activity of some enzymes (elastase and collagenase) which destroy collagen and elastic tissues. Several clinical studies have shown that blueberry anthocyanosides reduce capillary damage statistically significantly compared to placebo.

Pineapple e.s. 250 GDU in Bromelain: this proteolytic enzyme performs important functions at the level of the connective tissue proper and above all against the ﬁbrin. In fact, bromelain possesses important fibrinolytic, antiplatelet, anti-inflammatory and draining properties, thus favouring the reduction of the sense of swelling and pain in the lower limbs typical of conditions of poor peripheral circulatory capacity.

Orthosiphon stamineus e.s. 0.2%: it is known for its diuretic and depurative action. It increases the volume of urine in a moderate way, favouring the excretion of sodium, potassium and even chlorine. The diuretic action of the plant is also due to a decrease in fluid retention by colloids present in tissues and blood. These effects are very useful even in the case of cellulite, since it is known that the tissue affected by this problem is very rich not only in water but also in uric acid.

Troxerutin: is a ﬂavonoid that is part of the rutoside family. This natural substance has proved particularly useful in the treatment of chronic venous insufﬁciency as it greatly reduces the formation of oedematous states. It has also been shown to be effective in preventing inflammatory states of the endothelium and thus preventing chronic alterations of the vessel wall that can lead to conditions of severe venous insufﬁciency; it is also very active on the capillaries, which improves its function, reduces its fragility and also associates these properties with those that are antithrombotic, ﬁbrinolytic and anti-oedema.

Vitamin C: exerts its antioxidant activity in this case speciﬁcally with respect to the connective tissue for which it guarantees not only a protective action but also a speciﬁcally reparative and regenerative action.

Red vine e.s. 95%: together with the black blueberry, it is one of the most known and used phyto complexes with an antioxidant, anti-oedema and protective action on the microcirculation. The most important components found in the leaves belong to the category of bioflavonoids (anthocyanidins and proanthocyanidins). ln particular the bioflavonoids of the red vine have an intense antioxidant and anti-inflammatory activity. Their most important action is carried out at a capillary level where they positively influence the vascular permeability. In fact, procyanidins are able to stabilize collagen fibers and inhibit the catabolic activity of elastase, an enzyme that leads to the degradation of this key connective tissue protein.

Melilotus e.s. 40%: the main effect of the coumarin present in the Melilotus is that expressed on the lymphatic drainage, which is essential to ensure the return of the liquids present in the extracellular spaces towards the heart. A deficiency of the lymphatic circulation in fact causes these liquids to accumulate in the tissues and thus swell, which is particularly common in the ankle area. Furthermore, the coumarin significantly reduces the demolition of the catecholamines, in particular of the adrenaline at the vascular level with consequent improvement of the contractile capacity of the blood vessels.