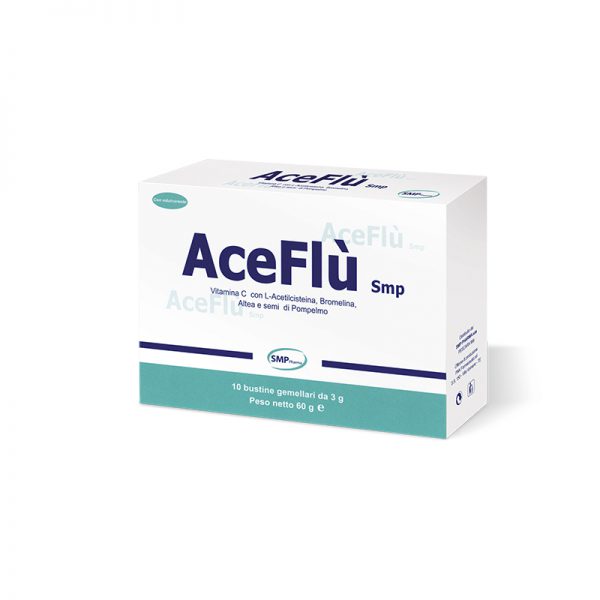 Dietary supplement of Vitamin C with L-Acetylcysteine, Bromelain, Althea and Grapefruit seeds indicated to provide an additional supply of these nutrients in case of deficiency or increased need.
Vitamin C contributes to the normal function of the immune system and to the protection of cells from oxidative stress; Althea can promote the functionality of the mucous membranes of the respiratory system and the well-being of the throat; Pineapple can promote the drainage of body fluids and Grapefruit seeds can have an antioxidant effect.

N-Acetylcysteine: is the acetylated form of the amino acid L-cysteine that is so more stable and more easily absorbed in the intestine. In addition to the well-known mucolytic activity performed by this molecule, an another important effect is to counteract the action of free radicals as the molecule has a marked oxide-reducing and antioxidant action (L-cysteine is a natural precursor of glutathione, one of the most powerful natural antioxidants in the body). This effect proves to be of particular importance in smokers.

Vitamin C: as it is well known this vitamin possesses various roles among which it increases the resistance of the organism, strengthens and stimulates the function of the immune system, destroys free radicals and prevents cellular degeneration (including the aging process) as well as participating in the processes of cellular respiration. The association with N-acetylcysteine in the antioxidant activity is particularly important.

Bromelain from Pineapple: contained in the stem, in the fruit and in the juice has always been known for its proteolytic properties (digestion of proteins) but not only. Its anti-edema and ﬁbrinolytic action is also well known. Specifically and for these characteristics, the “ﬂuid” action against mucus is carried out at a bronchial level with potential beneﬁcial especially in cases of asthma, sinusitis or chronic bronchitis.

Althea officinalis e.s.: is a plant very rich in mucilage but its phytocomplex is also characterized by the presence of flavonoids, anthocyanosides and phenolic acids. It is traditionally used in inflammatory diseases of the upper airways and oral cavity due to its anti-inflammatory and antitussive action. In particular, the mucilages present are stratified on the mucous membranes, in particular on those of the first airways and protect them, on the one hand preventing the contact with toxic substances of various types, on the other allowing their repair and healing.

Grapefruit seeds e.s.: the seeds extract, contains mainly bio-flavonoids and glucosides, and its efﬁcacy is based on the synergy of these different components that characterize the phytocomplex. Bioflavonoids have different properties, but in particular they perform coagulant, haemostatic, anti-inflammatory and antiallergic actions, and are effective in slowing the formation of free radicals (antioxidant action). Glucosides are a group of substances that have important anti-infective effects. In fact, the broad spectrum activity of grapefruit seeds against bacteria, viruses and fungi is well known.